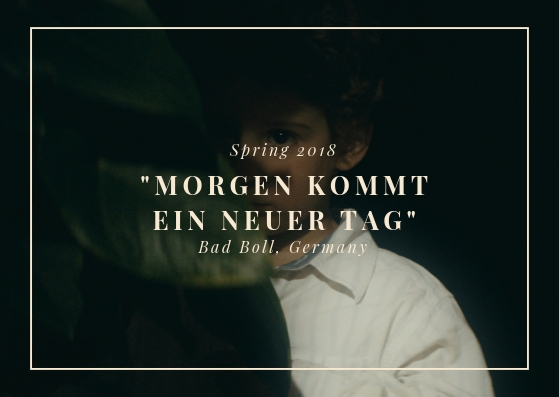 I had this picture in my head. In my mind, I saw a boy plagued with guilt and a guilty conscience. This was the idea for my new short film.

As soon as I started working on the Screenplay for „Morgen kommt ein neuer Tag“ it was almost like all of the words just knew where to go. When I finished, however, it didn’t feel right. The feeling of fulfillment and the happiness of being done after all the work just did not come. Because something about the story just did not work. Although I was able to convince Makito Kumazawa as my Director of Photography and Saskia Götze to design the costumes with the first version, the book was missing something in my eyes. But one night while I was talking about the story the solution became clear to me and I rewrote the script the same night. Finally, the screenplay worked and just felt right.

We started the pre-production and spent weeks with press events, finding crew members and starting the casting. It was a lot of work but I was satisfied because the project finally came to life. I was fired up for this project and spent almost all of my nights working in front of the big window of my small one-bedroom apartment. I pitched the project to potential sponsors, wrote casting calls and prepared for my first radio interview. I spent several hours searching for a property because we needed a large, old and free-standing building to shoot in.

At first sight, both Makito and I fell in love with the Evangelische Akademie in Bad Boll. The building was a perfect fit for the script and was exactly as I had imagined. So we decided to rent one whole floor for a whole week. Although we initially committed to be able to shoot in the building without further costs, this changed with our specific request. Suddenly, we were supposed to pay several thousand euros for the location and which we just couldn’t handle within our tight production budget. We called the person in charge of the house several times and tried to find a solution for the situation. Finally, they agreed to lower the price for us and since we could build all of the backdrops in this house we agreed.

With the first day of shooting coming closer my excitement rose. For hours, Makito and I discussed the storyboard and the entire project. „Morgen kommt ein neuer Tag“ was the first movie I shot with Makito and it wouldn’t be the last one. We got along well from the start and had a similar idea of how to implement this project. Since our producer had quit due to a dispute before shooting started I now took over the production myself. Again, Makito came to my help and took care of all our technology sponsorships.

We started the shooting with some outside scenes with a reduced crew. While most of the crew prepared our main studio, I drove to a small playground with Makito, our gaffer Edzard Ehre and our sound engineer Nils Eberhard. There we shot some scenes of the protagonists‘ childhood with Claudia Dalchow and Alexander Weis as his parents. Gabriel Campos Fernandez and Temuera Davies played the young protagonist and enchanted the whole set. While Temuera was able to gain some experience as an actor before, it was Gabriels‘ first time in front of a camera. I had a lot of respect for working with kids, but it was just absolutely amazing! The two were so natural with their actions and naturally got involved in the situations I created. Their harmony with Claudia and Alex worked just perfectly. So the first morning of shooting went well and as we returned from the small outside shoot Christian Jung was already waiting with the lunch. He also deserves a big thanks: he cooked us delicious dishes every day and took care of all our food sponsors.

The next days were exhausting because our schedule was tight, but the mood on the set was fantastic! Spring had just begun and the sun was shining every day. Danylo Zaczkiewicz excelled in the role of „Robert“ who runs away from the truth. I was so happy to have found an actor who both fit into the role and was very ambitious. Even weeks before filming started we talked almost every day and spoke a lot about the role. He had even arrived earlier for more rehearsals so we could work more intensely on his role and so I had a good feeling when the shoot began. Josephine Nahrstedt convinced me immediately. In her casting video, she portrayed the role of „Lola“ as I had always imagined it with my mind. She and Danylo had great chemistry and working with these two was a real pleasure!

Two other important roles in this film are Robert’s parents. Although they are smaller parts, they are still the linchpin of the storyline, so it was particularly important to me to carefully cast these roles. With Claudia Dalchow and Alexander Weise, I found two actors who excelled themselves. For the first time, I staged violence in such an intimate context, and the two were the perfect actors for it, so the result of these scenes is as shocking as it is authentic.

„Dr. Jansen“ is the young psychiatrist who treats Robert as well as another important character. While I was writing I always imagined Ben Moedder in this role, with whom I had worked together a few years earlier on the shooting of „Träume aus Glas“ („Dreams of Glass“). Luckily he liked the screenplay immediately and so he came to Bad Boll for the shoot.

The shooting time flew by: We shot outdoors and built a complete apartment in a congress room of the Evangelische Akademie. At night, we lit up a whole meadow with UV-lights and painted our actors with fluorescent paint.

When we were done with our last scene, the technology was stowed away in the cars and we all sat together and had a barbecue. I was overcome by a feeling of joy, melancholy, and gratitude. We had done a great project in a short time and I was so happy about all the people who contributed to it: the crew, the cast and all the wonderful people who had sponsored us through StartNext. Thanks to every single one of them it was possible to shoot this film and as the fireworks (which happened to streak the sky over Stuttgart at that night) exploded over our heads, I was proud, content and eager to see the final result!